End of the summer. Time to get the memories sorted. I’ve been on three trips this summer – three sets of memories to be categorised, post-produced – and then forgotten on the hard drive? In the past I have always been glad when I actually went to the trouble of making a photobook of my pictures. It’s a royal pain in the arse to do so – but nothing beats a tangible album that you can actually pull out of the shelf and have a look at. Do you ever listen to a phonecall over and over again? No, and neither do you pull up the pictures from last summer on your computer. But you will look at a photo album.

It’s a great challenge to be known as a photographer – because people expect you to have your images sorted and at the ready all the time. With my friends and family weighing on my conscience, I actually sat down last week and organised two thirds of this year’s holiday snaps. Two separate holidays which were shared with a group of other people – some family, some friends. Nobody would actually *expect* printed and shared photobooks, but there is an implied hope that “the photographer” will have a goody produced by the end of the summer. After all they all had to endure delayed progress on hikes (because the photographer needed five minutes to work out the angle of a shot), frozen smiles (on the customary group shot while the photographer fiddled with the tripod) and unmentionable cursing (when the photographer realised that a vital piece of equipment was for some inexplicable reason not at the ready in the otherwise overflowing photobag). 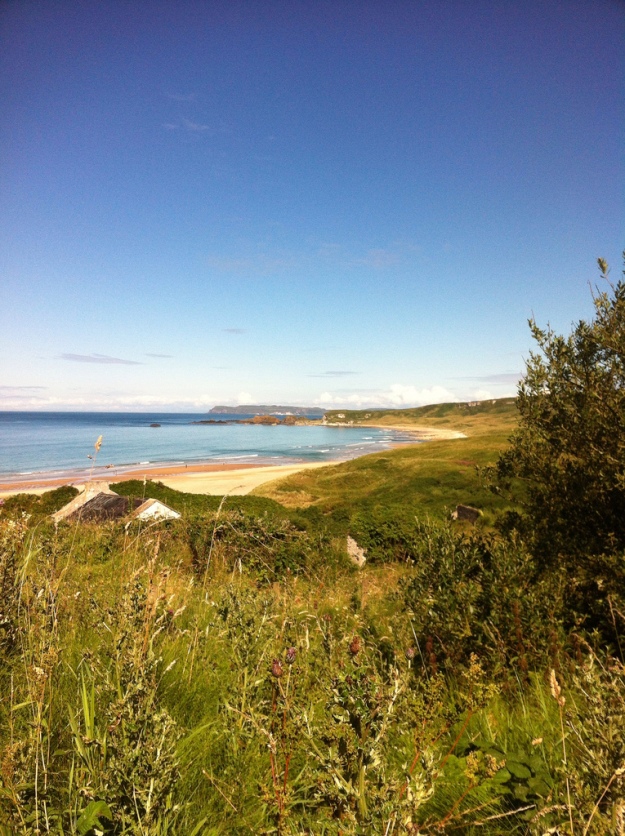 And so I sat down and post-produced – not my favourite occupation at the best of times. (I sincerely wish I was Annie Leibovitz. Not for the impressive photography  but for the money to employ a team of Photoshoppers. Ha.) After hours of saturating, cropping and straightening, I was ready to commit my oeuvre to the printing press. As it happened I chose two different printers for my two photo books. That was due to the fact that I had bought a voucher for a printer before the summer – but that only covered one edition. For the second book I had to look up the cheapest current offer, which happened to be by a different company.

At least that gave opportunity for a little comparison. The two services used were myphotobook.ie and photobox. For both projects I needed a photobook with 36 pages. Now, when it comes to the quality of the end-product I am usually rather lenient. This is not a professional product as such (on my part) – it is an album strictly for personal use, not a portfolio that I need to show off or a photo book which I would want to submit to a contest. Therefore I am not particularly discriminating about which provider I use. The quality will be roughly the same. Let’s face it – they all use the same kind of technology, anyway.

What is more interesting is the user-friendliness of the services, and that was something that I had opportunity to compare. I used both systems in a different way in that I downloaded the myphotobook software and created my book on my PC before uploading the finished document to their online portal, while the photobox album was created after uploading the chosen images into their system and then compiling it all to a book online. In comparison, it was a much faster process to download the software onto my computer first and then re-uploading the finished book to myphotobook than working in photobox’s online system. The upload of my images alone took about three hours – during which I was impatiently fiddling around, waiting to get my hands on the book creation. Verdict: Use a provider with downloadable software!

All services offer a range of backgrounds (distracting and gimmicky – don’t use them! Plain white or black work best), cover designs (equally gimmicky and when used usually the sure sign that you are looking at the work of an amateur – sorry, but true) and layouts. The latter you can have automatically chosen – to make the whole process of creating the album faster and easier for you. Unfortunately, I have yet to see a service that offers a satisfying result for that. In my experience, the automatic picture sorting usually results in an odd combination of images on the pages. Of course – the computer cannot distinguish between those images that mean something to you and those that are mere padding. The advice: Don’t click on “fill automatically”. You will inevitably have to re-arrange the images when you preview it. Might as well do it to your own specifications from scratch. Verdict: Equally unsatisfactory auto-fill for both providers.

As for the turnaround-time: At the time of writing I am not holding the printed books in my hands yet. And the Irish postal service seems to be based on personal delivery by rowing boat and donkey cart. But both books were uploaded into the provider’s system within three hours of each other. Myphotobook received my order Sunday at 21:17 – I received feedback that the book had been printed and shipped on Thursday, 9:31. Photobox confirmed my order for 00:21 on Monday morning and had the albums printed and despatched by 18:02 on Wednesday. You do the maths – it took Photobox three days to finish my order; myphotobook slightly longer despite having sent it off a few hours earlier. Mind you, myphotobook had to print six editions, photobox only three. (But that is niggling – presumably it’s all automatic once it’s in the system and they do not work during the night.) Verdict: Turnaround times do not vary much between different providers.

Price is an important consideration when choosing your printer. A hardcover 20.4 x 27cm photobook with 36 pages comes up to € 29.95. Domestic shipping charges are € 4.95. Photobox charges € 26.99 for a square 20 x 20cm hardcover photobook with 30 pages. The postage and packing costs € 6.69. Considering that the myphotobook album is larger in size and has more pages, the price is better – and the postage cheaper. Verdict: myphotobook was more competitive in terms of price.

However, if you really want to make some savings on photobooks, plan ahead. Subscribe to a localised voucher portal such as Groupon or Living Social. They have photobook promotions on a regular basis, and you can make great savings when you buy a voucher there. You only have to remember to actually *use* the voucher – a problem that I have occasionally encountered after buying something on those portals – and then completely forgetting them in my inbox. Alternatively you can google for “photobook vouchers” and you’ll get plenty of offers in the results. Could be worth-while testing one of those providers and tapping into their discounts.

One of those vouchers came up in my local couponing service the day after I had put in my orders, dang. I bought a couple, however, because I have photo memories #3 still weighing on my conscience. Now that I have paid for the voucher, I hope the cheapskate in me will continue to remind me to use it.

I am not veering into betting here, but as part of my course I am currently maing a book as part of my submission to college. Or rather – I have already made my book. It is finally here, the book is here. I was getting rather nervous. Tomorrow is hand-in and I have not got my hands on my submission yet. This afternoon I checked the tracker and could not believe when I read that the status was “delivered”. I had only come home about an hour beforehand and there was nothing on the hall table. But then I just found it downstairs in the hall. *phew* The accountants must have taken it.

The book is nice with its sleeve and I like the size of it. Slightly disappointed by the lacklustre colours, though – Hm, I may be overly critical. The colours on the last two pages actually do pop quite nicely (should’ve put that canteen in the book earlier on…)

Book design is actually quite easy these days. You can find offers of varying quality and – subsequently – varying price levels all over the internet. Especially the cheaper offers are good enough quality to use for a print-up of holiday snaps or a little book present. If you want a professional look and feel, I would advise you splash out and get it done by a service that offers a choice of papers and sizes rather than the usual “one size/paper fits all”.

I really like my cover design. And I am thinking to myself that I might actually present the work at the exhibition like that. Just one large image, photo printed, dibond. Also, am thinking that I would love to use this as a postcard for the exhibition. Must get that done asap.

But worst of all, though: OMC – I have just spotted two stupid silly akjgqasxxao TYPOS in my artist statement which prefaces my Blurb book. In Bridget Jones’s words: “F*********************ck!!!!”
Will I get the “non-native speaker” allowance? Too late to do anything about it now, but I am very, very disappointed with myself.
Photos make great presents. But there is only so much wall space your lucky recipients have. Plus, it can be quite costly to give a *real* photo present: A print is nice and all, but will hardly go up on a wall without frame and mount. You’re looking at € 30 minimum for a nicely presented image – depending on size. But there are other ways of presenting images as presents. And I have just found one that will make a little girl quite happy, I hope.

A notebook with a customised cover. I ordered this from Vistaprint and it will be a stocking filler for the thoughtful little lady in the image. Yes, I know – I couldv’e just printed the image and glued it onto a notebook. I might have gotten away with it a bit cheaper. But the little detail that this is custom-made will not fail to impress ;-).
I have a few more photo pressies up my sleeve in the pipeline. Bearing in mind that Christmas is only less than four weeks away, I/you need to get my/your skates on with this kind of present. Don’t forget the delivery time it takes for these things to reach you. Happy printing 🙂
I know you don’t want to hear about it. Neither do I really. It is far too early to think about Christmas. *eeeeeeek* There you have it. I have used the C-word. And yet, planning is everything when it comes to Christmas. And think about it – we, as photographers, have a whole host of potential Chrimbo pressies at our fingertips.
Ok, I admit, not everyone wants to have a artsy-fartsy print of a deserted carpark in a Mid-Western industrial estate on their wall. But there’s so many great things you can do with photographs which even non-visual people will appreciate. Mousepads, t-shirts, mugs – all adorned. Hey, I have even seen a site somewhere where you can have your image of choice printed on a pair of flipflops. Great – just imagine: Your mum and dad on left and right sole respectively. Well, not a joke for everyone. I guess, you could – quite literally – put your foot in it.
So for the slightly more conventional gift-bearing photographer, maybe a personalised calendar is the way to go? I make them every year and give them to my folks. Always to much success. Yeah right, I know, they are my parents, of course they love everything I do. But hey, you’ve got to choose wisely who you give your hand-made, once-off pressies to! Mind you, I have been dithering and fuseling and postponing sending off that final order for several weeks now. But today it is going out!